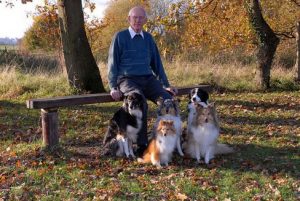 My first dog a farm bred collie Shane was given to me as a birthday present in 1969 from my wife Lesley. She had seen in the local paper puppies for sale and had wanted a dog for some time. Although not the best way to buy a puppy, and maybe at the time not my first choice for a birthday present. But he soon became an important member of the family. After completing a twelve week domestic course and then continuing with competitive training I started to enter competitions with him in 1970. Shane won out of Beginners and Novice but he had H.D. and sitting became a problem to him. So I decided to let him live life at his own pace, which he happily did until he was thirteen.

I am currently competing with Feroama Storm and Woughstock Wynsome Dryfte, who both go back to my Ticket Bitches Shanvaal Mist and her daughter Layash Fern, who we lost aged six years. Our rescue Sheltie Sandyglow Silver Shadow (Pebbles) I am just about to start competing with, so fingers crossed for the coming season. But whatever he decides to do in the ring Pebbles and all of our dogs past and present, can only be described in one word Special. The other two Sheltie’s in our household Mimerri Maybe a Breeze and Kamarlee Laiderette Milly (Gypsy) are worked by Lesley.

I started judging in 1978 and have judged every year since. My first Dog & Bitch Tickets were in 1985 and since then I have awarded Obedience Certificates regularly. I had the privilege to be asked to judge the Inter-Regional in 2001, Pro Dogs Final in 2004, the first Good Citizen Special Pre-Beginner Final and Y.K.C. Triathlon in 2006. And I had the unexpected Honour and Pleasure to be invited to judge the ultimate, The Obedience Championships at Crufts 2008.